Benefits of Permanent Residency in Australia

HomeBenefits of Permanent Residency in Australia 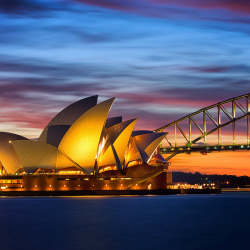 Benefits of Permanent Residency in Australia

Australia is one of the most popular destinations among migrants all around the world because it offers a high standard of living, great business opportunities, good lifestyle, strong economy and amazing landscapes in the country. People seek a better life in Australia and that’s why it is the first choice of migrants present all around the globe. Getting a permanent residency will give you various privileges like unrestricted travel, right to study, live and work without any constraints. The Department of Immigration and Border Protection enables an immigrant to apply under various types of visas according to their requirements. The Australia Government encourages the skilled immigrants to come and settle in the country and also there are around 21 percent of international students who are studying in Australia, the equivalent enrollment is allowed in all the universities for any required course. Australia has a strong economy for the skilled immigrants who wish to migrate and with its strong economy, the country attracts a large number of immigrants from all around the world and the number has increased a lot over the past few years. Due to its spectacular landscapes, scenic beauties and quality of living, many people have migrated over to make a living in Australia. The quality of life found in Australia is the best among all countries of the world.

Here are a few benefits of permanent residency in Australia which an immigrant enjoys:

After getting a permanent visa, the immigrant enjoys the freedom to pursue any course that one prefers in any university of Australia. The residents have various courses to choose from and can avail the education loan which may help them to manage their finances and extra expenses which occur during their permanent residentship.

Freedom to work is one of the important benefits of permanent residency in Australia and working here becomes really easy for an immigrant holding the PR visa. An immigrant can work for any employer and can enroll in any occupation. However, the government and public sector jobs are strictly restricted to the Australian residents. The immigrants can enjoy the same benefits and laws as provides to the local ones also they are entitled to the worker’s compensation and be the part of trade unions/industrial unions.

The immigrants holding permanent visa enjoy the benefits of health insurance and the health schemes run by the government which is known as Medicare. Under this scheme, the person can receive free health treatment at any public hospital and subsidy on the medicine.

As a permanent resident the immigrant can avail the social security benefits such as unemployment, unforeseen health problems and student benefits as provided by the Social Security Department of Australia.

The benefit of permanent residency in Australia also includes that the resident can sponsor his/her relatives as an Australian immigrant, but this would only be possible after an immigrant stays for a certain period of time and meets the pre-requisite responsibilities of the Australian Government.

Freedom to move in and out of the country:

Once an immigrant becomes the Australian Permanent Resident, he/she will enjoy the freedom to travel in and out of the country for 5 years which is the total duration of the permanent resident visa. After the expiration of visa, he/she will still be able to stay indefinitely in the country but will not be able to fly out of it until the resident return visa has been issued. Although a permanent resident of Australia also enjoys the free entry and exit from New Zealand.

As soon as the person becomes the permanent resident, the credit rating of the person immediately increases and he gets into the better position of getting loans, such as home loans, personal loans, credit cards etc.

Benefit as the first home owner:

According to the Australian Laws, if a person buys his/her’s first home in the country that person is entitled to get a $7,000 incentive and waiver in stamp duty which is another great benefit of permanent residency in Australia.

Australia is highly immigrant friendly for all the aspiring immigrants and about 20% of the country’s population is from foreign land, making it most diverse country in terms of culture. The diversity in Australia makes the settlement easier for the immigrants as it plays an important role in forming the tolerant & welcoming attitude of the government and the people of Australia.

Banks and other financial institutions of Australia offer loans at highly affordable interest rates to the immigrants settled in Australia on permanent residency status. If an individual becomes a permanent resident of the country, buying a car or house in Australia wouldn’t be difficult at all with the loans. Once a person buys a house, he/she can easily sponsor the family members and relatives.

ivan masula
13:45 25 Jul 19
Special thanks to Miss Joan, she is very friendly and accomodating. She explained the process clearly

Jahangir Ali
08:07 19 Jul 19
Thank you Sachin Ji for your helpful guidance. I am thankful to you and your team for the efficient work done for my case. Thanks for always answering my queries and calls in time. I hope to have my permanent residence soon.

Chirag Acharaya
19:17 12 Jun 19
Most trusted immigration company in Abu Dhabi. I have done my study visa recently and would like to recommend to all students and parents if they need right course guidance which not only same money and time but also grant high visa success.I loved the services and I am thankful for Reach2World for helping me to get my student visa for Canada even I had one refusal from other Consultancy. Highly Recommended

Richika Arora
09:44 25 Mar 19
Did a lot of research before approaching Reach2World for my Canada Visa. I won’t lie, I was very skeptical about using an immigration company for this. To my surprise, my experience was rather pleasant. As a team of Immigration Consultant was extremely professional with his timelines and documentation handling. They updated me regularly on the status of my application during the process. I think the key to success in this business to gain a clients trust and deliver on the promises. I can safely say Reach2World did both. I would highly recommend these guys to everyone looking for similar services. Thank you Guys!
Next Reviews